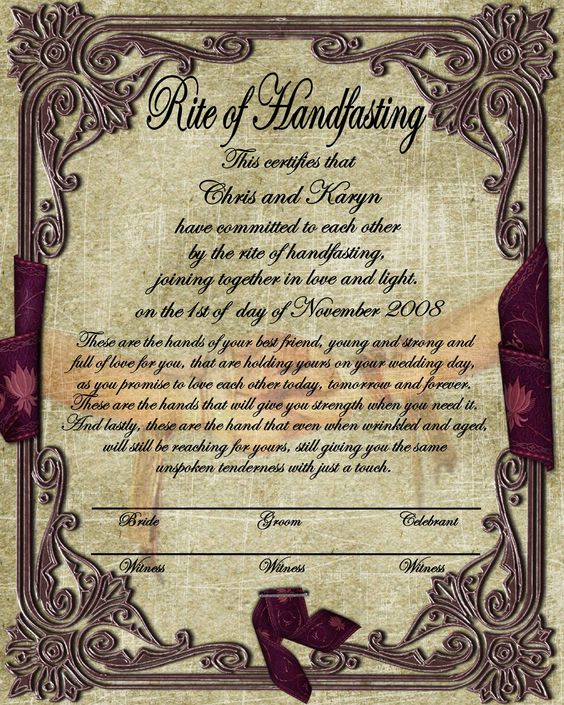 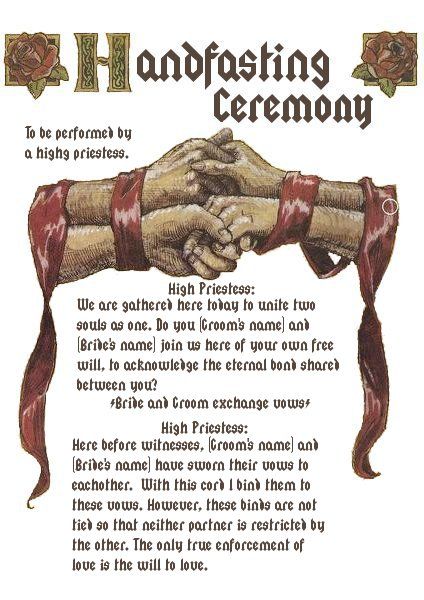 There are two conflicting beliefs about the history of Handfasting:

Handfasting was suppressed following the Synod of Whitby in 664 [CE}…when Celtic Christianity was abandoned and Catholicism followed.

During the 1995 movie, Braveheart, Mel Gibson, in the role of William Wallace, was handfasted with his girlfriend Murron. Handfasting has since grown in popularity among Cowans (non-Pagans) — particularly those whose ancestors lived in ancient Celtic lands. 3

What is the legal status of a handfasting ritual?…

To read the rest of this article please click on this link: http://www.religioustolerance.org/mar_hand.htm

Traditionally, a Handfasting was performed by a priest or priestess, who would invoke the energies of the four elements to create a sacred circle in which the couple could be joined as embodiments of god and goddess. The cloth that bound their hands was usually the tartan plaid, representing the groom’s clan or family group. One of lovely symbols about Handfasting is that it is also a declaration of intent, where the bride and groom clearly state that they are marrying of their own free will, as well as stating their vows. In this particular ceremony, six cords are draped over the couples’ hands, one for each vow made.

(Bride) and (Groom), know now before you go further,
that since your lives have crossed in this life,
you have formed eternal and sacred bonds.
As you seek to enter this state of matrimony you should strive
to make real the ideals that to you, give meaning this ceremony
and to the institution of marriage.

With full awareness, know that within this circle
you are not only declaring your intent to be hand fasted before your friends and family,
but you speak that intent also to your creative higher powers.
The promises made today and the ties that are bound here
greatly strengthen your union
and will cross the years and lives of each soul’s growth.

Do you still seek to enter this ceremony?

FOr the rest of this informative article please click on this link: http://www.vowsoftheheart.com/ceramonies/handfasting-wedding-ceremony/

Many Pagan couples choose to have a handfasting ritual instead of a traditional wedding ceremony. In some cases, it may be simply ceremonial — a couple declaring their love for one another without the benefit of a state license. For other couples, it can be tied in with a state marriage certification issued by a legally authorized party such as a clergyperson or justice of the peace. Either way, it’s becoming more and more popular, as Pagan and Wiccan couples are seeing that there is indeed an alternative for non-Christians who want more than just a courthouse wedding.

In centuries gone by, handfasting was a popular custom in the British Isles. In rural areas, it could be weeks or even months before a clergyman happened to stop by your village, so couples learned to make allowances. A handfasting was the equivalent of today’s common-law marriage — a man and woman simply clasped hands and declared themselves married.

Generally this was done in the presence of a witness or witnesses. In Scotland, marriages were considered the office of the church until 1560, when marriage became a civil matter rather than a church sacrament. After that time, marriages were divided into “regular” and “irregular” marriages.

Typically the gentry and landowners were married in the “regular” way, so there could be no question later on if the marriage was legally recognized or not — in cases of inheritance, this could be a big issue. Handfastings or irregular marriages were considered the domain of the lower class and peasants. Around the middle of the 1700s, irregular marriages were made illegal in England — but since Scotland kept the tradition, it wasn’t uncommon for an amorous British couple to elope over the border. Gretna Green became famous because it was the first town in Scotland that eloping lovers would encounter once they left England — and the Old Blacksmith’s shop there became the site of many ‘anvil weddings’, performed by the village smith.

The word “handfasting” fell by the wayside for many years. In the 1950s, when the witchcraft lawswere repealed in England, various occultists and witches — including Gerald Gardner and Doreen Valiente — searched for a non-Christian term for their wedding ceremonies. They settled on “handfasting”, and the concept was resurrected within the Neopagan movement. Typically, a Pagan handfasting was meant to be a secret ceremony, held only in front of your coven or study group. As Wicca and Paganism become more mainstream, however, more and more couples are finding ways to work their Pagan and Wiccan spirituality into their marriage ceremony.

The actual term “handfasting” comes from the tradition of the bride and groom crossing arms and joining hands — basically, creating the infinity symbol (a figure-eight) with the hands. In Neopagan ceremonies, the clergyperson performing the ceremony will join the couple’s hands with a cord or ribbon during the ritual. In some traditions, the cord remains in place until the couple consummates the marriage. While some people may choose to have their handfasting be a permanent bond, others might declare it to be valid for “a year and a day“, at which point they will re-evaluate the relationship and determine whether to continue or not.

Who Can Be Handfast? Anyone!

One benefit of having a handfasting ceremony is that it because it’s not the same as a legal wedding, there are more options available to people in non-traditional relationships. Anyone can have a handfasting — same-sex couples, polyamorus families, transgender couples, etc. In Dianic Wicca, Z Budapest used the word “tryst” to refer to a ceremony for a lesbian couple.

Dormant for so long, the idea of the handfasting ceremony has enjoyed a huge rise in popularity. If you’re fortunate enough to find someone you love enough to spend your life with, you may wish to consider having a handfasting rather than a traditional wedding ceremony.

FOr more on this articlew by PAtti Wigington on About.com please click on this link: http://paganwiccan.about.com/od/handfastings/a/Who-Can-Perform-A-Handfasting.htm

Looking for information on how to hold a Pagan handfasting ceremony? Here’s where we’ve got it all covered, from the origins of handfastings to jumping the broom to selecting your cake! Also, be sure to learn about magical handfasting favors to give your guests, how to make sure you’ll have a magical ceremony, and who can actually perform your handfasting!

How to Choose Your Handfasting Cake
Jumping the Broom: A Besom Wedding
Handfasting Bonfires: What You Need to Know
Deities of Marriage and Love
Sample Handfasting Ceremony Template
Handfasting Basket (Thirteen Blessings)

To read all the wonderful information Patti Wigington has up on About.com for Handfasting click on any of the links in this article.