Many blessings for a fantastic new calendar year!

A History of New Years 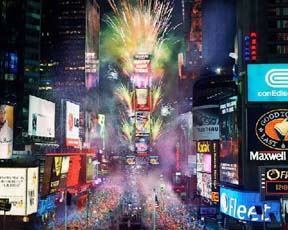 In 46 B.C.E. the Roman emperor Julius Caesar first established January 1 as New Year’s day. Janus was the Roman god of doors and gates, and had two faces, one looking forward and one back.  Caesar felt that the month named after this god (“January”) would be the appropriate “door” to the year.  Caesar celebrated the first January 1 New Year by ordering the violent routing of revolutionary Jewish forces in the Galilee.  Eyewitnesses say blood flowed in the streets.  In later years, Roman pagans observed the New Year by engaging in drunken orgies—a ritual they believed constituted a personal re-enacting of the chaotic world that existed before the cosmos was ordered by the gods.

As Christianity spread, pagan holidays were either incorporated into the Christian calendar or abandoned altogether.  By the early medieval period most of Christian Europe regarded Annunciation Day (March 25) as the beginning of the year.  (According to Catholic tradition, Annunciation Day commemorates the angel Gabriel’s announcement to Mary that she would be impregnated by G-d and conceive a son to be called Jesus.)

After William the Conqueror (AKA “William the Bastard” and “William of Normandy”) became King of England on December 25, 1066, he decreed that the English return to the date established by the Roman pagans, January 1.  This move ensured that the commemoration of Jesus’ birthday (December 25) would align with William’s coronation, and the commemoration of Jesus’ circumcision (January 1) would start the new year – thus rooting the English and Christian calendars and his own Coronation).  William’s innovation was eventually rejected, and England rejoined the rest of the Christian world and returned to celebrating New Years Day on March 25.

About five hundred years later, in 1582, Pope Gregory XIII (AKA “Ugo Boncompagni”, 1502-1585) abandoned the traditional Julian calendar.  By the Julian reckoning, the solar year comprised 365.25 days, and the intercalation of a “leap day” every four years was intended to maintain correspondence between the calendar and the seasons.  Really, however there was a slight inaccuracy in the Julian measurement (the solar year is actually 365 days, 5 hours, 48 minutes and 46 seconds = 365.2422 days).  This slight inaccuracy caused the Julian calendar to slip behind the seasons about one day per century.  Although this regression had amounted to 14 days by Pope Gregory’s time, he based his reform on restoration of the vernal equinox, then falling on March 11, to the date had 1,257 years earlier when Council of Nicaea was convened (March 21, 325 C.E.).  Pope Gregory made the correction by advancing the calendar 10 days.  The change was made the day after October 4, 1582, and that following day was established as October 15, 1582.  The Gregorian calendar differs from the Julian in three ways:  (1) No century year is a leap year unless it is exactly divisible by 400 (e.g., 1600, 2000, etc.); (2) Years divisible by 4000 are common (not leap) years; and (3) once again the New Year would begin with the date set by the early pagans, the first day of the month of Janus – January 1.

On New Years Day 1577 Pope Gregory XIII decreed that all Roman Jews, under pain of death, must listen attentively to the compulsory Catholic conversion sermon given in Roman synagogues after Friday night services.  On New Years Day 1578 Gregory signed into law a tax forcing Jews to pay for the support of a “House of Conversion” to convert Jews to Christianity.  On New Years 1581 Gregory ordered his troops to confiscate all sacred literature from the Roman Jewish community.  Thousands of Jews were murdered in the campaign.

Throughout the medieval and post-medieval periods, January 1 – supposedly the day on which Jesus’ circumcision initiated the reign of Christianity and the death of Judaism – was reserved for anti-Jewish activities: synagogue and book burnings, public tortures, and simple murder.

Blessed be dear ones.

Up-Date On Lady A

Kit is due to get out of the hospital within the next few days. She doesn’t even own a coat or a pair of shoes to keep her warm. We cannot imagine what it is like to lose everything you have but she can, she watched the nightmare unfold right in front of her. I just wanted to make her life a little easier when she did get out. I have this image in my mind of her leaning up against a tree, in extreme pain because the bone is stuck through her skin, in complete horror, all by herself watching everything she owned go up in the fire. Hoping and praying it was a horrible nightmare only to get out of the hospital and find out it was really, very real. She worked hard for everything…

Since this gathering is being held on a holiday I am going to keep it very short. For those of you joining us from down under I think it is a work day another reason, I am keeping it short. Remeber you can always do this ritual on your own anytime is convenient for you.

Please do not enter chat after circle has started as this breaks the protection of our circle. Thank you!

WHAT YOU WILL NEED:

Lady Beltane: I walk this circle three times three to make it safe for you and me. I take us from this time and place to a place where there is no time and where we are between worlds.

Everyone: Please tell us your first name and where you are joining us from.

Lady Beltane: I welcome you all to our Super, full Moon gathering. I send you blessings for a great new year.

EVERYONE: We will now take 3 minutes to meditate on the outcome we want. I suggest you do a meditation on this goal every day until it happens.

LADY BELTANE: I now bring us back to the present time and to the planet we live upon. The circle is open but never broken. Go in love and peace my dear ones.

I have decided it is appropriate to bring you history and what I can find on histories and practices of different Earth based religions beside the mostly commonly brought to you in this site. Since this is a site that was made to teach and bring you information outside of main stream Wicca. The first articles are on Vodun or in some parts of the world referred to as Voodoo.

The word ‘vodun’ — the Haitian word ‘Voodoo’ is derived from — comes from the African Fon Language which is still spoken today in Benin. Vodun means “divinity” or “Idol”.

The history of voodoo does not start, as many people believe around 1500 AD in Haiti, but about 15,000 years before Christ in Africa. Thus, the real source of voodoo is the Egyptian pyramids. These people would later come to be called ‘Yoruba’. They were slaves to the Pharaohs and Kings. These people were later released however they never forgot the unbelievable things that they saw. They had a profound admiration for God and desired to know him.

At This time the Yoruba crossed into Africa from Egypt, using a route which crossed over into Afica from the Nile …

To read the rest of this article please click on this link or copy and paste it into your browser: https://www.white-magic-help.net/About_White_Magic/Voodoo_History_Basic_Principles_Background.html

I Appologize for Inconsistent Postings