Ah Beltane . . . . flowers, maypoles, dalliances in the dark . . . . few sabbats feel more PAGAN than Beltane. Some of that is because the trappings of Beltane haven’t been adopted by the over culture (especially in the United States), and some of it’s probably because of the all the tree and flower sex going on right outside of our windows.

Here are eight quick ideas for your Beltane rituals and festivities. However you celebrate, I hope it’s great!
Read more at http://www.patheos.com/blogs/panmankey/2017/04/8-ways-to-celebrate-beltane/#SMQViQtfOU2mO8LZ.99

It’s Samhain-tide and for the two of us that means we observe all sorts of serious and not so serious traditions. Here’s our top 13 Samhain/Halloween activities. Yes 13…because 13 is witchy.

1) Ancestor Dinners – Think about the typical scene from your favourite holiday movie or hallmark commercial when the whole family gathers in the dining room around a beautifully set table. Now imagine that with a lot more black, and instead of great aunt Millie actually sitting over there at the head of the table with great uncle Tom by her side, there’s an urn with their ashes, lovingly placed. That’s how we do an ancestor dinner. Lots of great food. Toasting the dead. Remembering their names and telling their stories.
Read more at http://www.patheos.com/blogs/thewitchesnextdoor/2015/10/13-samhain-traditions-wellat-least-at-our-house/#Kiv3hWsDewCmir0v.99

Between my children and grandchildren I have 13. This is part of the reason I feel like the one of the world’s luckiest. and blessed woman. 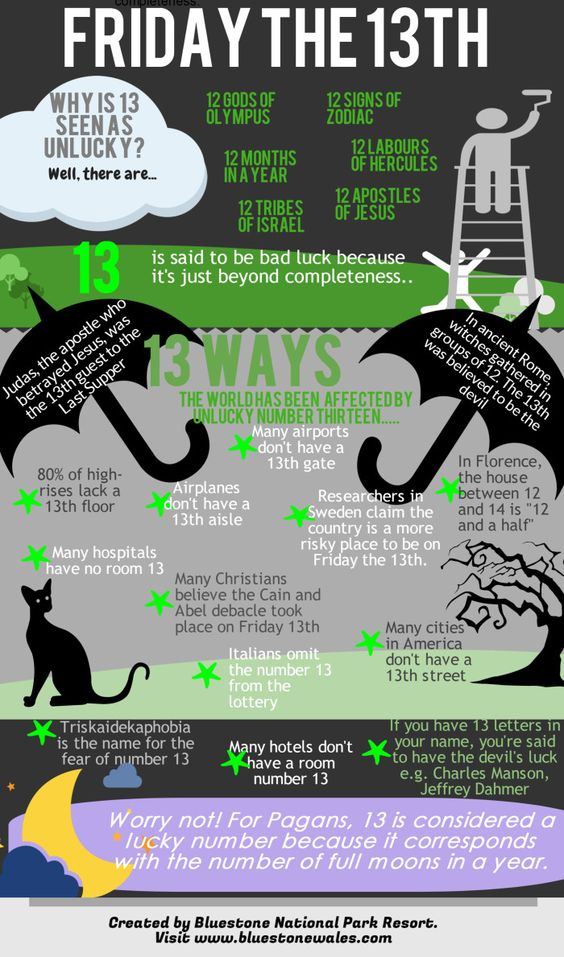 Celebrate Friday the 13th With a Friend
Friday the 13th is one of those days you either think is kind of fun or you fear in some way. There are friends who believe the day is bad luck. But I believe it’s just another day, one that you can use to celebrate a good time with friends. Plus, the cultural lore around the holiday is quirky and interesting.

Why Is Friday the 13th a Big Deal?
There is no real evidence that bad things happen on Friday the 13th more than any other day. Some folks attribute the belief that Friday the 13th is unlucky with the lore surrounding the number 13, and the superstitions that follow it, which have really only taken hold in this latest century. Some believe the bad luck of that number is associated with the betrayal of…

Friday the 13th is believed to be an unlucky day in many countries, but a lucky one in others.
What do People do?
For most people who consider Friday 13th unlucky, it is more a question of what they avoid doing, rather than what they do on this day.

The fear of Friday the 13th is called friggatriskaidekaphobia – “Frigg” is the Norse goddess whom Friday is named after and “triskaidekaphobia” means the fear of “13”. It’s also known as paraskevidekatriaphobia, partly from the Greek word for Friday

Truly Frightning
It is a real fear – some people who have this disorder are even too afraid to say the words “Friday the 13th”. Others avoid flying on a plane, going to work, or even getting out of bed. According to the Stress Management Center and Phobia Institute in Asheville, North Carolina, millions of Americans are afraid of…

Friday the 13th: 13 Facts About the Unluckiest Day in the Calendar

Friday the 13th is considered to be the unluckiest day in the Gregorian calendar. Here are 13 facts about this day of ill-repute.

1. It’s Unclear Why it is Feared
Very little is known about the origins of the day’s notoriety. Some historians believe that the superstitions surrounding it arose in the late 19th century. The first documented mention of the day can be found in a biography of Italian composer Gioachino Rossini, who died on a Friday 13th. A 1907 book, Friday the Thirteenth, by American businessman Thomas Lawson may have further perpetuated the superstition.

Others believe that the myth has Biblical origins. Jesus was crucified on a Friday and there were 13 guests at the Last Supper the night before his crucifixtion.

Another account suggests that the day has been associated with misfortune since 1307, when…

13 Trivial Facts About Friday the 13th

(EndPlay Staff Reports) – It’s Friday the 13th. If you’re superstitious, you’re likely under the impression that this is the most unlucky day on the calendar. Here are 13 facts about Friday the 13th to help keep your mind off all bad things that could happen today:

1. This is the first of three Friday the 13ths on the calendar in 2012: January, April and July all start on Sunday, which means the 13th day falls on a Friday.

2. The 1980 film “Friday the 13th” grossed nearly $40 million during its initial cinema run, according to information from the Internet Movie Database .

3. Fear of the number 13 is known as triskaidekaphobia, while fear of Friday the 13th is known as paraskavedekatriaphobia.