Happy Friday!  Ready for the Norse creation story?  Sure you are!  I’ll warn you, it’s a bit weird.  So, pop some popcorn, grab a drink, and get comfy.

Before the world was created, there was a void called Ginnungagap.  To the north of this void was a land of ice called Niflheim, and to the south was a land of fire called Muspelheim.  The two lands expanded and grew closer and closer until the flames from Muspelheim began to melt the ice from Niflheim.  The drops of melting ice ran together and formed the first giant, called Ymir.  When Ymir would sweat, he would reproduce more giants.  Yes, from his sweaty armpits came the giants.  But wait, it gets weirder.

As the ice continued to melt, it eventually freed a cow named Audhumla.  She fed Ymir with her milk, and fed herself by licking the salt from the ice.  As she licked, she freed another being named Buri.  He was the first of the Aesir, which is the race of the Gods who live in Asgard.  Buri had a son named Bor, who married a giantess named Bestla.  They had three sons: Odin, Vili, and Ve.  The three brothers killed Ymir, and from his body, they created the world.  Ymir’s blood became rivers and oceans.  His skin and tissue became the soil.  His hair became the plants, his teeth became the rocks, and the clouds were once his brains.  The dome of the sky is the inside of his skull.  Gruesome, isn’t it?  The next time you’re at the beach, swimming in the ocean, think about what you’re doing according to the Norse myths.  You’re bathing in the blood of the first giant!  Yikes!

There are a few different versions of the story about the creation of the first humans.  One translation says that it was Odin, Ve, and Vili, three brothers, who made them.  Another version names Odin, Lodhur, and Hoenir as the brothers and creators of humanity.  At any rate, the story goes that the three brothers were walking on a beach and came upon two logs of driftwood.  They shaped the logs into the first man and woman, and named them Ask and Embla.  But Ask and Embla had no spirit, no breath.  The version of the story that I like best says that Odin gave them breath and spirit, Hoenir gave them senses, and Lodhur gave them blood and healthy color.  Some scholars believe that Lodhur is an earlier name for Loki, and I’m inclined to agree.  If you’re particularly interested in that speculation, I’ll be happy to direct you to some sources.

Ancient creation stories like this one do sound incredibly strange to our modern ears.  Nowadays, we have myriad theories about our universe, how it works, and how it all came about.  Our ancestors did not.  They had absolutely nothing to relate it to.  Can you imagine the first time that the Norse were told this story?  I often wonder how it went down.  Did the Gods try to relay this information through a volva (a seeress or shamaness)?  Did someone back then “horse” or allow a God to skinride them to tell the tale of creation?  Did They zap Themselves down to Midgard and tell us?  I had this scenario playing out in the back of my mind while I was preparing to write this article, and I felt inspired to draw it out as a short comic strip.  I am by no means artistically inclined, and you’ll see the obvious influence of the “Cyanide and Happiness” comics.  But this is how I imagine it might have gone when the Gods tried to explain the universe to the Norse.  Yes, it’s tongue-in-cheek, yes it’s a bit tacky.  What can I say?  I’m a Lokean, and Loki lends a lot of inspiration to me.  Enjoy my artistic rendition, and I’ll see you here again next Freyja’s Day for the third installment of Norse 101. 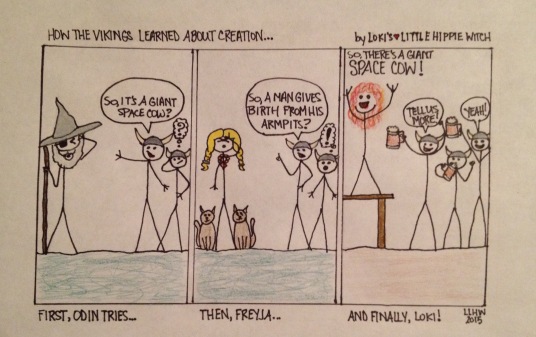 The Magick of Vervain

colors and their magical uses